We have only celebrated, and enjoyed, very English Golden Weddings, so I was intrigued to read Mike and Gill Radcliffe’s account of a Danish celebration, and delighted that they agreed to submit it for the marionfsblog.

It apparently was a marvellous affair which went on for three days, with intervals in between. It was very international: the golden bride and groom are English and Danish respectively, and their guests came from many countries. English and Danish was used for the celebrations, and it would seem some French and German thrown in too!

A Danish Golden Wedding, as told by Gill and Mike Radcliffe 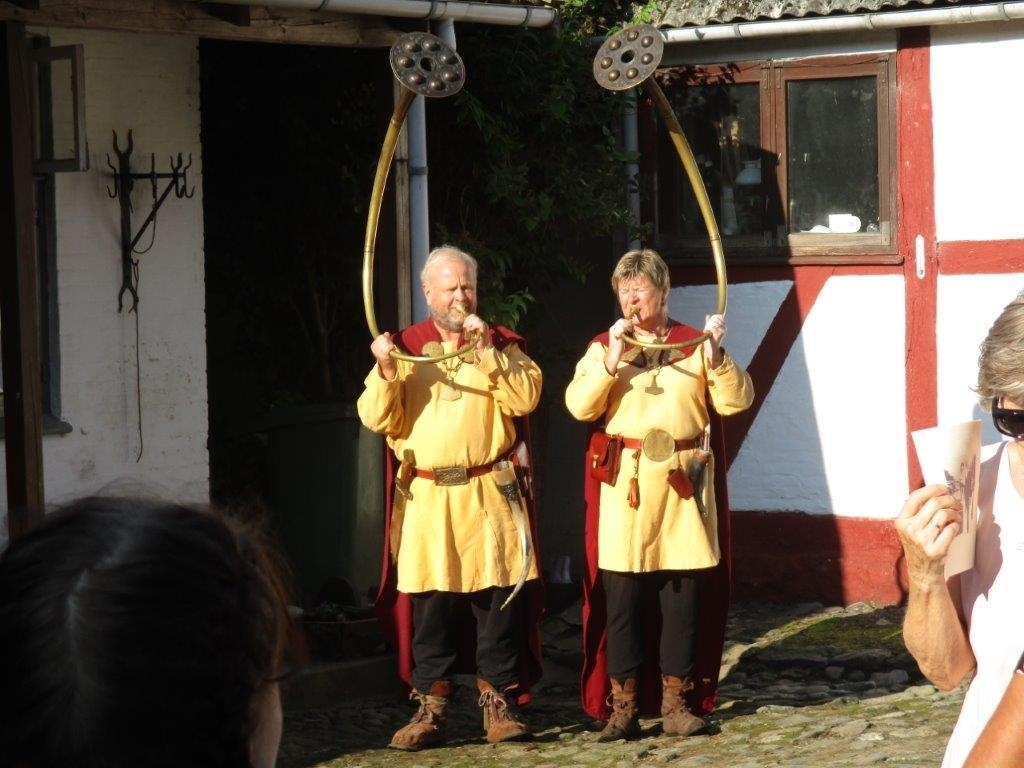 It is a glorious sunny morning. We have been instructed to arrive outside the farm entrance at 7.45am sharp where we find two musicians, a man and a woman, in medieval dress, with horns or lurs around their necks, instruments dating from Viking times. The horns have no valves and are played like a bugle, relying on the natural resonance frequencies of the instrument. If you look closely at a Lurpack butter wrapping you will see a pair of lurs interwined in the ‘Lurpack’ emblem. 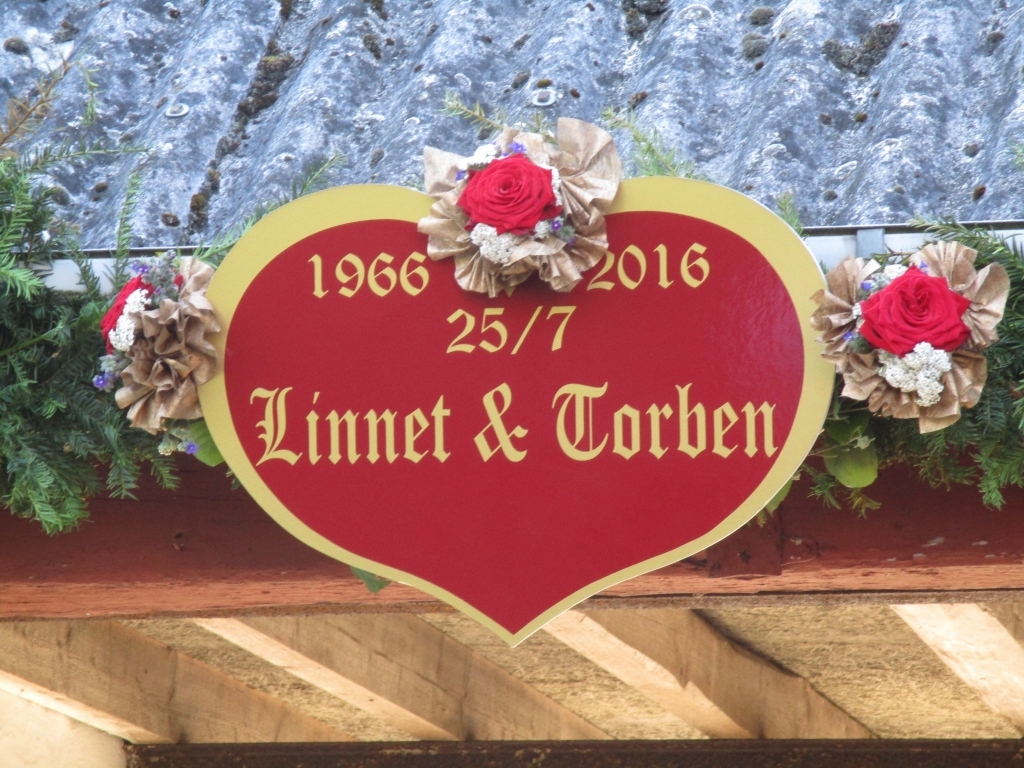 Over the archway to the farm entrance a plaque has been placed, with the date and Linnet and Torben’s names inside a red heart. Inside the courtyard a crowd of family, friends and villagers gather outside the front door, now decorated with an arch intertwined with leaves and flowers. At the stroke of 8 o’clock Linnet and Torben appear to the roar of the crowd and the striking up of music on the lurs.

This is followed by announcements in Danish and a speech of thanks from Torben. Song sheets are handed out, and we sing songs for about 15 minutes. We then proceed through the house to the garden, shaking hands with the happy couple and leaving gifts. 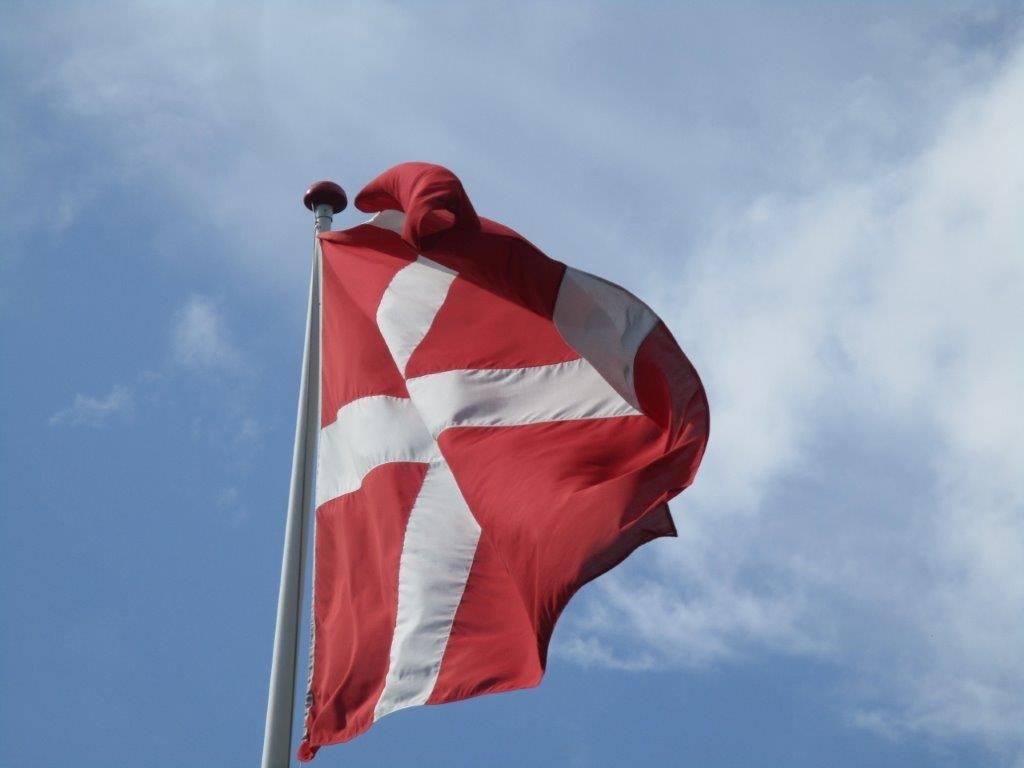 The next ceremony is the raising of the Danish flag, a white cross on a red background, said to be the oldest flag in continuous use since the middle ages. Torben oversees this ‘military’ ceremony of loyalty to the Danish Crown and the singing of another special song!

We then enter a gazebo for breakfast, Torben and Mitty sitting together at the head table surrounded by close friends and family. Any of the local villagers who want to take breakfast may join in; Torben and Mitty have no idea how many will turn up. They arrive in waves throughout the morning, and songs are sung intermittently for each batch of visitors.

The breakfast comprises delicious cheeshes and rolls, raspberry jam and coffee, and schnapps.   A grandchild, Sofia, aged about 12, has been learning the harp since the age of 5. She has a full size harp, positioned on the deck above the gazebo and at a signal is encouraged to begin. She is an accomplished harpist and her rendering of pieces by Bach and Handel are a delight.

By 12.30pm the flow of visitors to the farm to congratulate the happy couple has come to an end and it is time to ‘take a break’ and head back to our lodgings before the marathon evening fray.   About 6.30pm we arrive back at the farm where everyone is now smartly dressed for the celebratory dinner. We are offered champagne and try to remember the names of guests and family, quite a challenge! 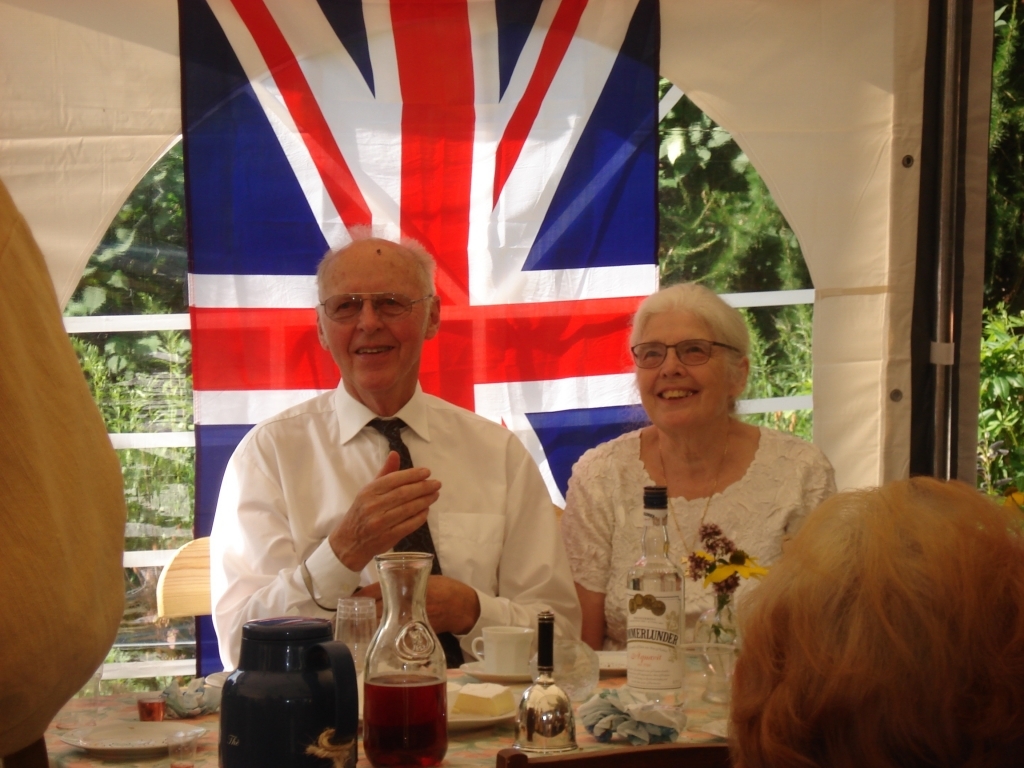 At the end of the first course, which seems to take an age, another recital on the harp by Sofia is announced. We all proceed out of the gazebo while the caterers tend to the dessert.   We return to our seats for the dessert course. This too takes an age to serve and eat. There is another song and Danish style hip hip hurray, and then it is time for Torben’s speech.

This is followed by the cutting of the cake, executed with great ceremony. The cake is cut meticulously into little pieces to distribute among the guests to have with their coffee, accompanied by yet more songs, often with words subverted to praise the happy couple!

As a final flourish, Torben offers an array of firewater. It is about midnight by the time we make our departure. It has been a memorable day, with ancient customs still resonating in modern times.