With a flurry of excitement and an enormous fanfare of publicity, a brand new out of town supermarket opened in Ashbourne last week. Apparently according to all the excitement that was being generated, it was to be just what Ashbourne needed, but it seemed hard to see why, in a small town already served by a Coop, Sainsburys, Waitrose and M&S, and already concerned about the future of small local independent shops.

And what is more the antis continued… it wasn’t even British.

Anyway, as with so many contentious planning issues, the big boys seem to prevail to the unashamed delight of the pro-the-german-supermarket-whose-name-begins-with-A brigade, some of whom apparently camped overnight before the store opened in the hopes of winning one of the valuable prizes offered to first comers.

First one friend after another slightly shyly admitted that they had visited the supermarket out of curiosity and found to their possible surprise that maybe it was going to be a good thing after all. Prices were incredibly low… 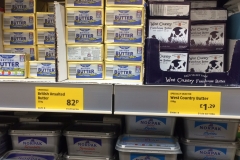 So, somewhat late in the day I went yesterday. As you can guess from the pics, it was a perfectly ghastly day, and no marks for also assuming quite rightly, that my resident photographer had declined to accompany me…

And far be it from me to do any supermarket’s publicity for them, but it was an enjoyable, even impressive experience. 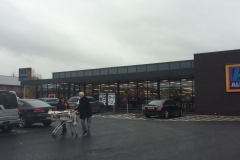 For a start, there’s a spacious car park outside (free of course) and wide aisles inside. Some things were incredibly cheap, a number of brands were familiar but lots were not.

The layout will take some getting used to. Certainly I didn’t needed an Arc Welder, whatever that is, or bargain ladies’ running shoes or men’s lambs wool pullovers for under £20 in amongst the food shelves, but it’s easy enough to just walk past. 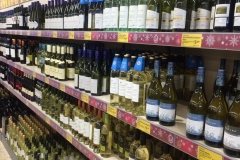 I quickly stocked up four heavy bags worth – 35 items including two bottles of New Zealand wine, some very British beer, 2 packs of ground almonds, caster sugar, flour, butter and a beautiful avocado and masses else and found I had only spent just under £60! The total was £59.22 in fact. I actually wondered if there had been a mistake, but no…

How do they do it? Apparently they pay their workers more than any other local supermarket too so they’re not economising there. The check out staff were friendly and pleasant, service was fast and I gathered you are expected to put everything back into your trolley to pack into bags up at a shelf further on, rather as one does in IKEA, instead of holding up the queue as one tries clumsily to pack everything into collapsing carrier bags while still at the till.

I was also amused to see the shop had clearly taken on board the need to prove their Britishness, as you can see from the pic of their cater bag at the top of the post. Union Jacks, St. Andrews flag. There were ‘Produced in Britain’ assurances on practically every packet of unfamiliar makes of food.

Good luck to them I say! If it helps to bring down prices in the other supermarkets, well and good. If it makes it easier for truly poor households to feed their children well, even better.

I shall return, but will certainly not stop using the local independents, who may not always be cheaper but whose quality of food is superb, and whose service so personal and friendly. (And we’ll stick with our weekly Riverford veg box, and milk, and local eggs, all delivered to the door) but I do appreciate that we’re fortunate enough to be – almost – well enough off to do so.

6 thoughts on “Another New Supermarket for Ashbourne”