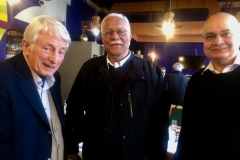 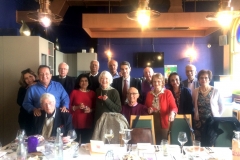 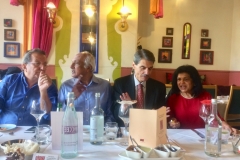 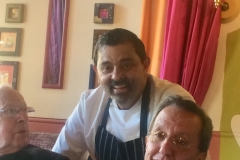 We arrived to find Bombay very hot, crowded, colourful, noisy and bewildering. We were met off the boat by someone from the Bombay Gymkhana to ask John to play cricket, and rugby for Bombay. Teaching at that stage seemed to come further down the agenda.

Our flat wasn’t ready for us, so we spent the first few weeks staying with the headmaster, George Ridding and his wife Elsie. As well as the rugby, John immediately got swept into the busy life of The Cathedral and John Connon School – a large very academic school, widely respected as the best in Bombay.

Founded in 1860 by the Anglo-Scottish Education Society the school is still is situated right in the centre of Bombay. Fortunately for us all teaching was in English and in those days pupils still took the Cambridge Overseas School and Higher School Certificates. Pupils came from all races and religions, sects and castes, all united by their parents’ desire for them to receive the best education possible.

I have few memories of those first few very bewildering days other than trying to wash John’s once ‘white’ rugby kit in the shower and failing miserably. It had immediately been dyed a permanent rusty red by the monsoon mud most the matches seemed to be played upon. For some reason all the other players seemed to turn up in sparkling white outfits…

It was all part of my trying, it seemed with equal lack of success, to master becoming a grownup wife, in a new country with new customs, new food, bought in unknown metric quantities, cooked on a two ring portable gas stove… (Any baking was done in a Dutch oven, a tin box which one placed over one of the gas rings.)

Meanwhile, back at the school, Mr Ridding was very generous in encouraging John to broaden the children’s interests and activities, in a school where traditionally note-taking and learning by rote had been the order of the day. John was able to organise a lot of extra-curricular activities, field trips and famine relief work, and we frequently invited pupils up to our flat for tea. We learnt that all this was much appreciated by the children and their parents.

Fifteen of John’s former pupils organised a reunion in London last week. What a warm, happy occasion, beautifully organised, in a Parsi Indian restaurant near Tower Bridge, called Cafe Spice Namastehttps://www.cafespice.co.uk. We were so very happy to see everyone, and indeed were treated as honoured guests. Several of John’s ex-pupils, many now retired, told how much they had appreciated him. One of them actually told me, “He was the first person who taught me to think.”

What a lovely way to set a seal on his long teaching career.

And a big thank you to all our Cathedral School friends for what they in turn did for us.