Still reeling after seeing Dr Faustus at the RSC Stratford Swan on Saturday – an “alarmingly, excitingly open ended play,” essentially about Good versus Evil (and a lot else). 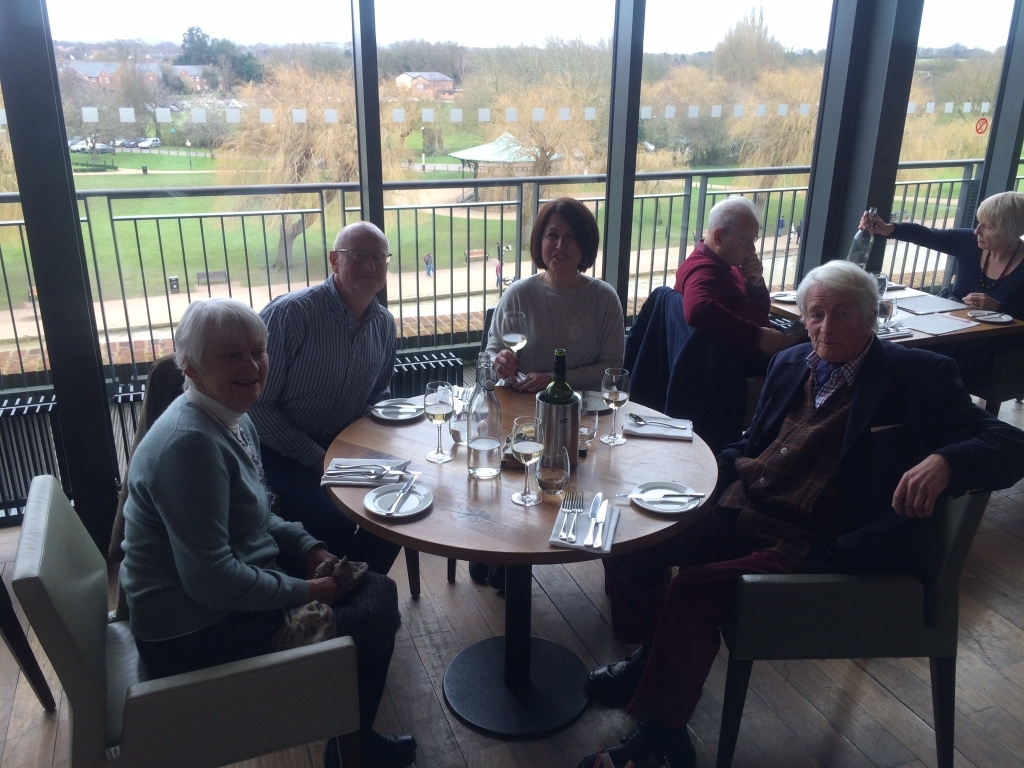 Maybe not the ideal play for someone rather depressed or suffering from a sense of guilt but with consciences on hold, Bloody Marys and a truly delicious lunch before the show Debbie, Trevor, John and I as always had a thoroughly lovely time. Our Stratford trips are a much appreciated treat.

Faustus was written in the late 16th Century, by Christopher Marlow whose own religion, political loyalty and sexuality had not surprisingly excited much controversy and suspicion.

Dr Faustus is the central character – or is he?

That’s the first question…Does Mephistopheles the devil share the role or are they indeed one and the same person, representing Faustus’s ‘good and bad angels’ waging an internal conflict? In this production they enter the stage simultaneously, dressed identically, each lights a match and whoever’s light dies out first plays Faustus.

It certainly suggests that they may represent two aspects of the one man, Faustus. We are left to make up our own minds and opinions vary, even within our little group of friends watching together.

In theory Faustus himself is the hero, the hero with the tragic flaw, a Renaissance scholar bored by and wanting personally to extend the limits of his mediaeval, authority-based learning. He begins by dabbling in the black arts and soon gives in to the temptation to sell his soul to the devil who promises him unlimited power and learning but only for 24 years. After that lies damnation.

At first he enjoys his new powers but very soon starts misusing them horribly. As soon as he has ‘sold his soul’ his whole character seems diminished: the noble scholar forgets his very respectable aspirations for great learning and turns at first into a small minded practical joker, then quickly becomes far more malicious, entirely misusing his new powers.

He is plagued from time to time with doubt but lacks the will or any real incentive to give up the pleasures of his new found powers.

As things deteriorate truly nightmare-inducing fast-moving brutality results, although there are occasional comic moments, and the band of scholars recall Clockwork Orange with their bowler hats and black suits. There is constant action, often frenetic dance and movement, accompanied throughout by music intentionally both ‘exciting and repulsive’.

It is a short play. At the end the audience filed out of the theatre, shell-shocked and silent, and Debbie, Trevor, John and I talked of nothing else all the way home. It had certainly set us all thinking…

I could say with every confidence that we all four are principled and ‘good’ people. To my surprise, I was the only one of our four who who, as a youngster, had been taught – and not just by my nuns – about Good and Evil, Heaven and Hell, temptation, even Satan/the devil and God etc. as being relevant to daily life, even if only as concepts rather than physical beings as they had been in the middle ages.

And yet to me there had been nothing unusual or odd about my upbringing.

Our parents didn’t belong to some weird sect. They were very normal, down to earth people, honest, upright, sincere and kind. They were church goers, and we were encouraged to say our prayers, taught clearly what was right and what was wrong. We were told that God watched over us, and protected us; he was all-knowing and aware of whatever we did, and thought, good and bad. He was kindly and forgiving – but only if we were genuinely sorry – if we had done something naughty or plain ‘wrong’ such as telling a lie or being unkind to each other.

So it did feel a bit as though someone up there was keeping the score, and one needed to keep on the upward, plus side, or who knew how things might end!

Until I was nine, in Fort Jameson (now Chipata, Zambia) my sister, brother and I had gone to Sunday School every week, where the wonderful but already probably very old fashioned Miss Field, reinforced in us all her well meaning but no doubt Victorian ideas of right and wrong.

She dinned into us – now horribly unfashionable – principles such as the need always to ‘Put God first, others next, self last’. Also, one had to make a positive contribution to what one might ask God to do. It was all very well praying to God for help passing an exam or winning a race but you had to put your own effort in too: “Pray to God, sailor, but row to the shore’ we all chanted. Useful advice for youngsters these days wanting instant celebrityhood and fame!

Every Sunday she gave us large colourful stamps to stick in our Sunday School book. As far as I can remember, we attended happily.

Thereafter the tone of my moral teachings veered wildly as my parents moved and we changed from charismatic extremely low church to rather rigid Very-High-Church-Anglican schools. The emphasis may have changed but throughout was the constant theme of good and evil, right and wrong, the devil finding work for idle hands and so on. It was only as I got older – and maybe when I come into contact with (some of) our nuns – that I started trying to work things out for myself.

That’s a story for another blog post. Meanwhile, do go and see Dr Faustus if you can!