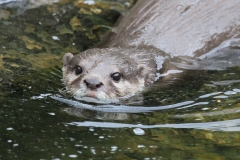 Momentarily lowering our sights somewhat from big game to a pair of otters, we recently spent a lovely afternoon at the London Wetlands. 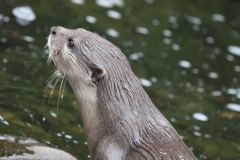 As I am sure many of you will know, the London Wetlands in Barnes – almost the centre of London – was created about 15 years ago from disused reservoirs and what was effectively urban wasteland. The first urban project of its kind in the United Kingdom, by 2012 it was voted the favourite nature reserve in the country by BBC Countryfile Magazine. 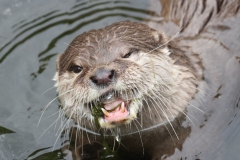 It certainly is a lovely place to visit, so easy to reach, and yet one is miraculously transported to what feels like genuine countryside – Norfolk perhaps.

It is attractively and intelligently laid out. There is plenty to learn, and plenty to enjoy, and any time we have visited there have been lots of touching family groups – young mums out with their toddlers, grandparents taking slightly older children out for a treat, all ages obviously thoroughly enjoying themselves. 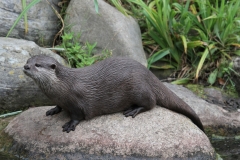 We had planned a (childless) visit and had been hoping for a lovely sunny day. In fact it turned out humid and grey, but quite bright enough to photograph kingfishers, which was John’s aim this time. Another target to cross off the list – fish eagles in Africa, kingfishers in England… 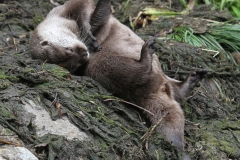 So far African fish eagles – and kingfishers – have come up trumps. Alas, here in the Wetlands there was not a kingfisher to be seen, in spite of the fact one had apparently been spotted earlier, so we were told. Photographing an English kingfisher is still very much on the list of ‘to dos’.

Instead, we happily made up for our disappointment by watching these otters, who performed most oblingly for us. From a distance they looked quite charmingly small and cuddly; close up – especially when they were eating – they actually looked quite ferocious!

2 thoughts on “Otters in the London Wetlands”