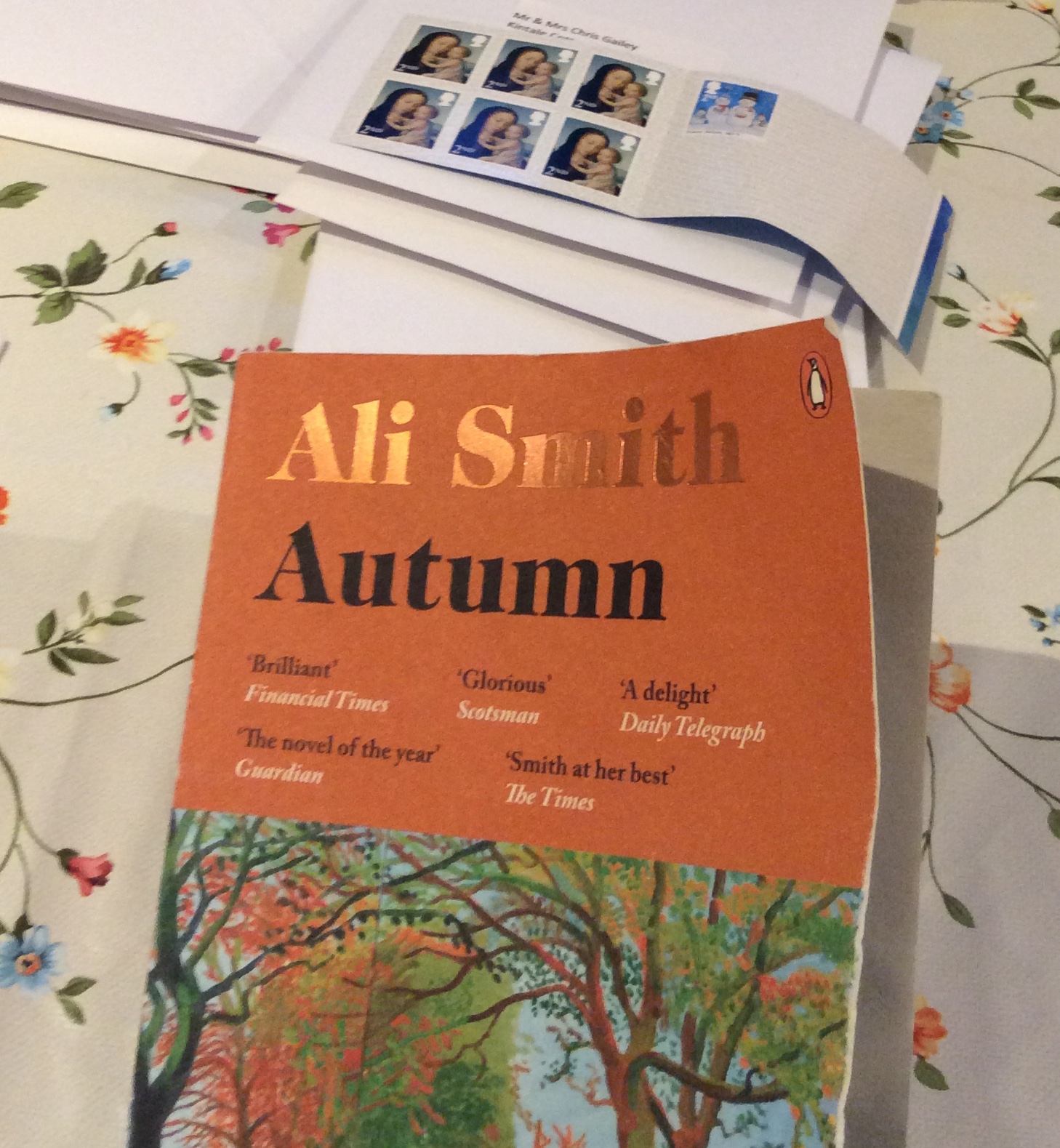 I am sneaking away from our Christmas card list, briefly, and rather unwisely given that I have only reached the Hs, to touch on my latest Parwich book group choice, which has rather joyfully introduced into my life a little known ‘Swinging Sixties’ Pop artist called Pauline Boty.

My choice of book this time round was Autumn, by Ali Smith. A random choice, totally influenced by the bright orange and green David Hockney picture on the cover and the fact it was being promoted when I had popped into Daunt’s Bookshop on the Marylebone High Street last time I was in London.

I discovered that it was on the Man Booker prize short list. The very knowledgable man behind the till recommended it personally too, which was more than enough for me. They do know what they are talking about in Daunt’s.

And I am not going to preempt the next meeting of our book club when we meet here to discuss the book next Wednesday, but I will admit that when I first started Autumn I found the stream of consciousness of the old man’s random recollections, the darting around of timescales and venues all rather perplexing.

Although a child of the Fifties and Sixties myself I had never heard of Pauline Boty, who seemed as I read on to play an increasingly significant role. Who was she? Did she exist at all or was she a figment of a dying man’s imagination?

So one turns to Google…

And of course she did exist, and what an exciting person: a tragically short-lived, beautiful, highly intelligent artist whom nobody much seems to have heard of. Why? How intriguing. I rapidly became hooked and wanted to share some of what I had gleaned with my book club friends before we met to chat about the book itself, Autumn. I may well find they all have discovered far more than I, but it’s worth the risk and I look forward to learning more.

I do not pretend to have become an instant expert. Most of what I have learnt is from an article by Stuart Kelly in the Scotsman of 26th October 2016, and an interesting article by Ali Smith herself in the Independent. Her pictures are fun and must have seemed supremely shocking at the time.

Why are we having to learn all about her over 50 years after her untimely death?

She had a tragically short life 1938 – 1966
A lot of her work is lost.
She was strikingly beautiful.
A lot of her pictures are comments on contemporary incidents and attitudes.
She was not always taken seriously, as a (beautiful) woman in a man’s world.

As Ali Smith herself remarks, woman were the passive models, there to be painted, by men. Men were the artists. (Apparently there was no ladies’ loo provided in the Royal Collage of Art building, which says it all.) Pauline Boty was relieved to find in her husband – whom she married ten days after they met – someone who admired her for her intellect as well as for her looks.

She was multi talented, full of vitality. She managed to pack a great deal into her short life – artist, anger, actress, interviewer, left wing activist. She was very aware of what was going on in the world at that time, with Cuba, JFK’s assignation and the long term political consequences of lies and falsehoods surrounding the Profumo Affair which involved Christine Keeler, who died last week, and Mandy Rice-Davis amongst others.

Those of us alive then can fully appreciate Ali Smith’s linking of it to the consequence in our time of lies about Iraq, and the misinformation and lies before the EU Referendum. Pauline Boty was young and optimistic about what the future held, whereas now – especially post Brexit – we have become increasingly cynical and disenchanted.

In the case of Pauline Boty, her early death can be seen as a blesssing, for her, if not for her admirers for whom it is a tragic loss.