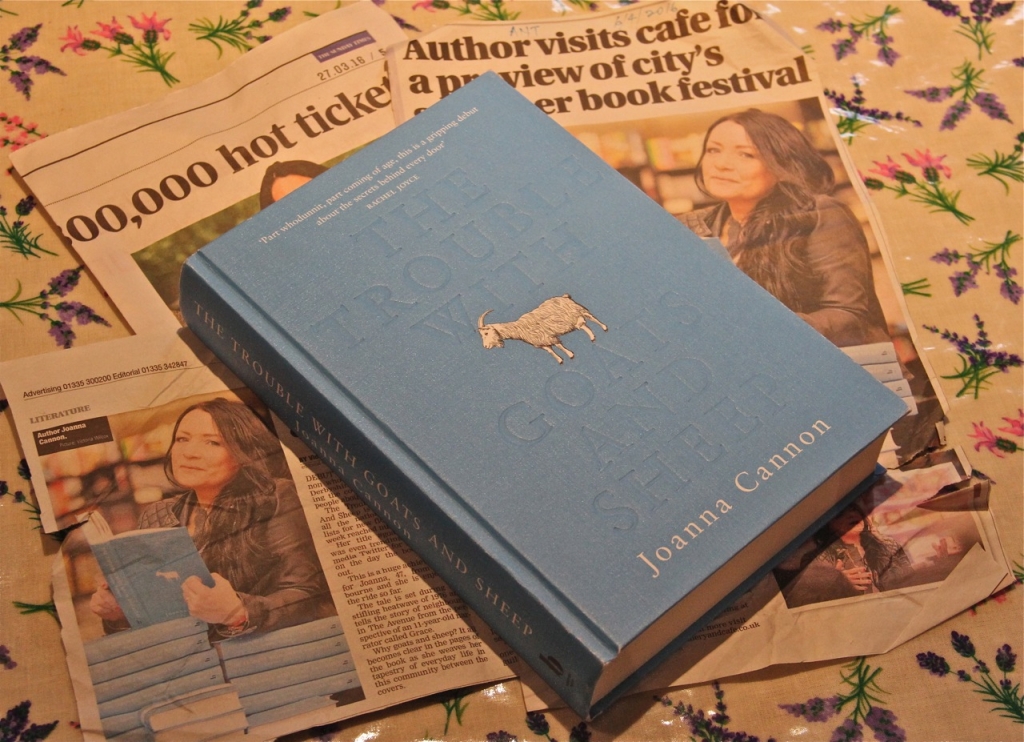 It’s not every day of the week that a first novel hits the best-seller lists, nor that the writer is from Ashbourne… Even less likely is it thatJohn and I would end up sitting with several friends at the same table as the author, Joanna Cannon, at the St John Street Gallery in Ashbourne where she recently gave a talk on her book. How special!

On first seeing the title one might think Joanna Cannon’s book The Trouble with Goats and Sheep would be an agricultural treatise, or a manual for sheep and goat owners. It actually is a novel, set in Ashbourne, in 1976 – the year of the hot summer.

The main characters are two young girls, Grace and Tilly. Grace is the more forceful, Tilly the more level headed despite her diminutive size, thick dark-rimmed specs and strange outfits – because of her delicate health her mother insists she wear a raincoat and sou’wester a lot of the time, despite the stifling heat.

Everything is seen through their young and naturally naive eyes,  their point of view. One of their neighbours, Mrs Creasy, has disappeared and with the endless summer holiday stretching ahead Grace and Tilly decide to find out what has happened to her and rescue her. Grace goes to church for guidance.

The vicar in his sermon describes a vengeful god pursuing with plague and sword those who like sheep have disappeared/gone astray. He is flummoxed when Grace asks him after the service how these ‘sheep’ will be rescued, and replies rather unhelpfully that all will be well if they and their community ‘find God’.

So they set off trying to find what has happened to Mrs Creasy so they can rescue her. Nearly every household despite outward appearances reveals its own troubles, anxieties and guilty secrets. The only people who didn’t were those individuals that did not fit in, those that the community always immediately suspected – the goats, in fact.

Grace and Tllly do not find Mrs Creasy but they do eventually think they find God, in a drainpipe and the community is all drawn miraculously together. All the petty and possibly more sinister differences and secrets hidden behind the doors that Grace and Tilly have unearthed are forgotten for the time being.

At this point our little Parwich Book Club struggled. We felt it very likely that young children might believe this rusty marking on the drainpipe to indeed be God, but surely not cynical grownups…?

We are hoping to ask Joanna to come to one of our Book Club meetings, and it will be interesting to discuss this aspect with her. She is a psychiatrist with plenty of insight into the way we all as individuals and groups act, and maybe also how guilt, wishful thinking, and perhaps a desire to be welcomed as part of a group can affect our behaviour.

Presumably nobody want to be a goat and sorting the sheep from the goats is not as straightforward as it seems. The assumption is that the sheep are the obvious ‘goodies’, the valuable, more useful, less troublesome members of a group or community… Joanna Cannon’s book reminds us that this is not necessarily true.