By way of a complete change of scenery… 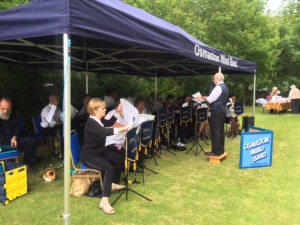 Bradbourne is a very small village, one of Parwich’s nearest neighbours, but by a geographical quirk it is technically Matlock, whilst we are Ashbourne, with  different telephone and postal codes so for some funny reason it seems further than it is.

Unusually, it is a ‘Thankful Village’, the only village in Derbyshire which suffered not a single casualty for soldiers fighting in either World War.

18 soldiers (out of a population of 130) enlisted to fight in the 1st World War, and all 18 returned, alive, even if probably seriously scarred physically and/or  psychologically. All nine that enlisted in the Second World War also returned, alive.

Anyway, driving past yesterday we saw a sign adversing their annual fete, so decided on a whim to pop in; we were delighted we had.  What a classic rural scene…The Osmaston Brass Band was playing, children were bowling at skittles, people were sitting at tables enjoying afternoon tea and others queuing up to buy homemade cakes and bread or buy raffle tickets.

It was so peaceful, so rural and so very ‘English’.