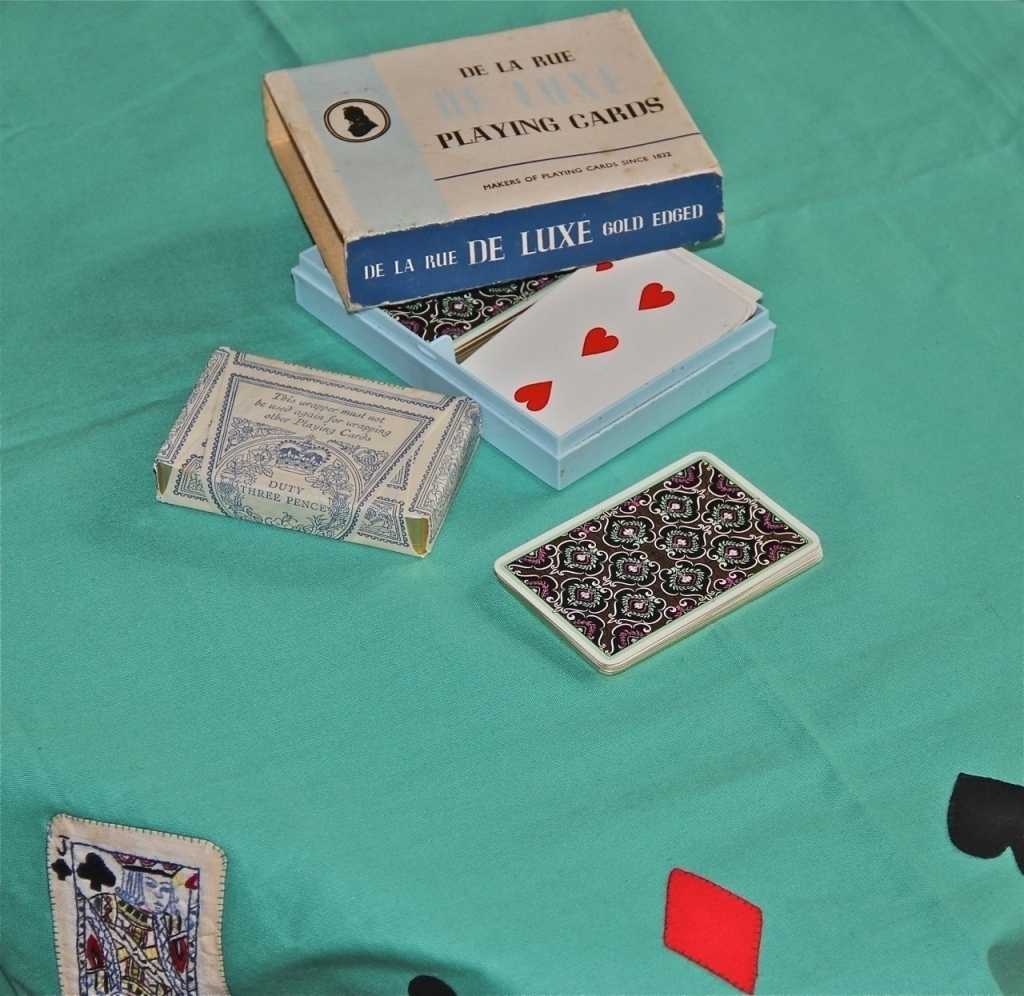 Learning to play Bridge properly is one of my retirement projects. It hasn’t started off too promisingly, as I missed so many classes last year I have had to enrol again with this year’s beginners.

These classes are most enjoyable, taught very skilfully and patiently by Barbara Rogers in Bakewell every Monday afternoon.

She needs to be patient. I find I can concentrate reasonably well on one aspect but fall to pieces once I have to think about more than one. This is tricky in bridge which far as I can see is a case of multi-multi tasking. Trying to remember who bid what – let alone what information their bid was conveying to their partner – and whether the Ace has already been played or not and how many trumps have already gone and who still has some…

So as well as the actual bridge, there is a fair amount of brain training going on. I’m not always sure I am up to it.

So, what a relief to get back to Oh Hell, also known as Weetabix and by a million other names. A game learnt at university (!) and which over the years has provided us with many an evening of fun with friends. I was amused to see that Bill Clinton and Steven Spielberg are keen Oh Hellers – I am not quite sure what to read into that! Anyway, there is just the right amount of skill and sheer luck, in uneven proportions each game.

How to play Oh Hell

Wikipedia knows all about it but I can summarise how we play, which seems to work well enough…

Seven players is the most that can play with only one pack of cards, otherwise you need a second pack and it also could become a bit unwieldy generally.

To begin, each player takes one card from the shuffled pack (52 cards, no jokers). The player who has picked the highest card deals and thereafter for each game the dealer is the player to the left of the previous dealer…clockwise.

The first round seven cards are dealt, then one card fewer each game until you get down to one, then up again until you have dealt seven again, after which the game ends, the final score is counted up and the winner announced.

Having dealt the requisite number to all the players the next card in the pack is trumps, turned up and placed in the middle of the table.

The point of the game is to estimate how many tricks you will make. Everyone bids simultaneously, banging their closed fists onto the table three times, in unison, counting ‘One, two, three!’

On the count of three everyone extends the number of fingers to indicate how many tricks they hope/intend to make. No last minute retractions…! The scorer must make a note to before the round starts avoid noisy contentions afterwards.

The player to the left of the dealer starts. Everyone in turn plays, going clockwise. You must follow suit unless you don’t have any cards of that suit, in which case throw away another or trump, if you want to and if of course you can!

The person who wins the trick places the cards face down on the table, at his place.

The next round six cards are dealt, and so on until after one you climb up again.

The luck is in what cards you are dealt (and of course, what the others have in their hand too, unbeknownst to you). The skill is in trying to make the right number of tricks without overdoing it; a less pleasant but totally legal skill lies in trying to stop your opponents from making what they hope to…

There are many different ways of scoring. What we do which seems to work all right: grant ten points for being correct, plus another five points per trick made. Similarly, if you are wrong, it is minus ten plus minus five for every trick over or below the number estimated.

As you can imagine, the scores can go up and down quite dramatically. It is important that one of the players is the scorer, keeping a clear record of what everyone bid each round and then what they actually scored for that round. The final score is totted up at the end of the game, but most scorers and players appreciate a running total as the game progresses so they know what they are up against.

Any queries or complaints about the game please go to Wikipedia! If you’re in the Parwich area and feel like a light-hearted evening of cards at any time, please give us a ring!We’re always happy to play.