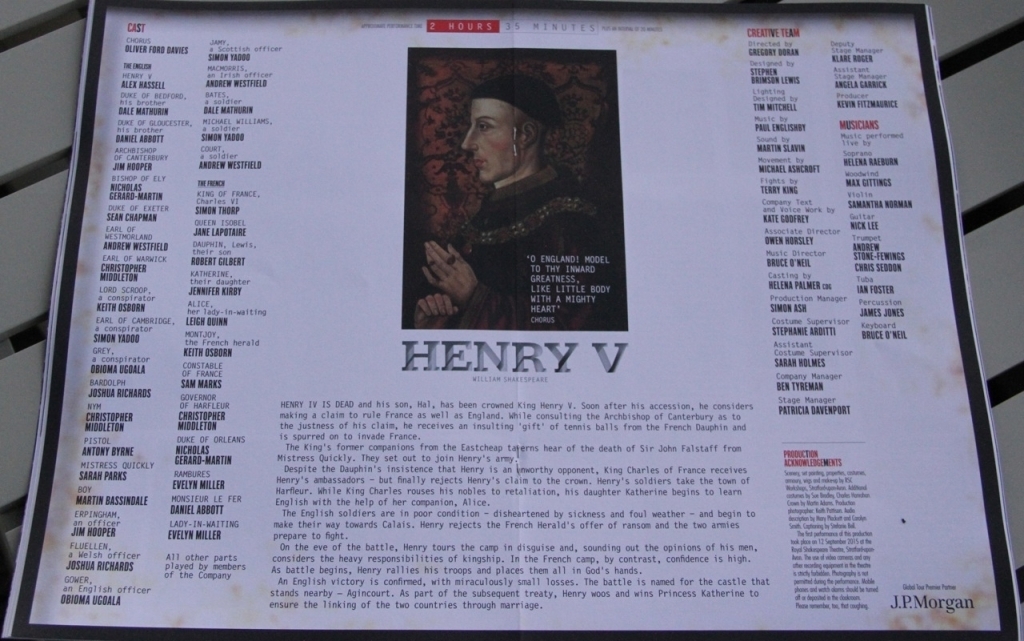 But, yes, John and I are happy enough to have just been to see Henry V at Stratford, having already seen Richard II, and Henry IV Parts 1 and 2 – thanks to our good friend Trevor who valiantly oversees the dramatic programme of a few fellow keen theatregoers. 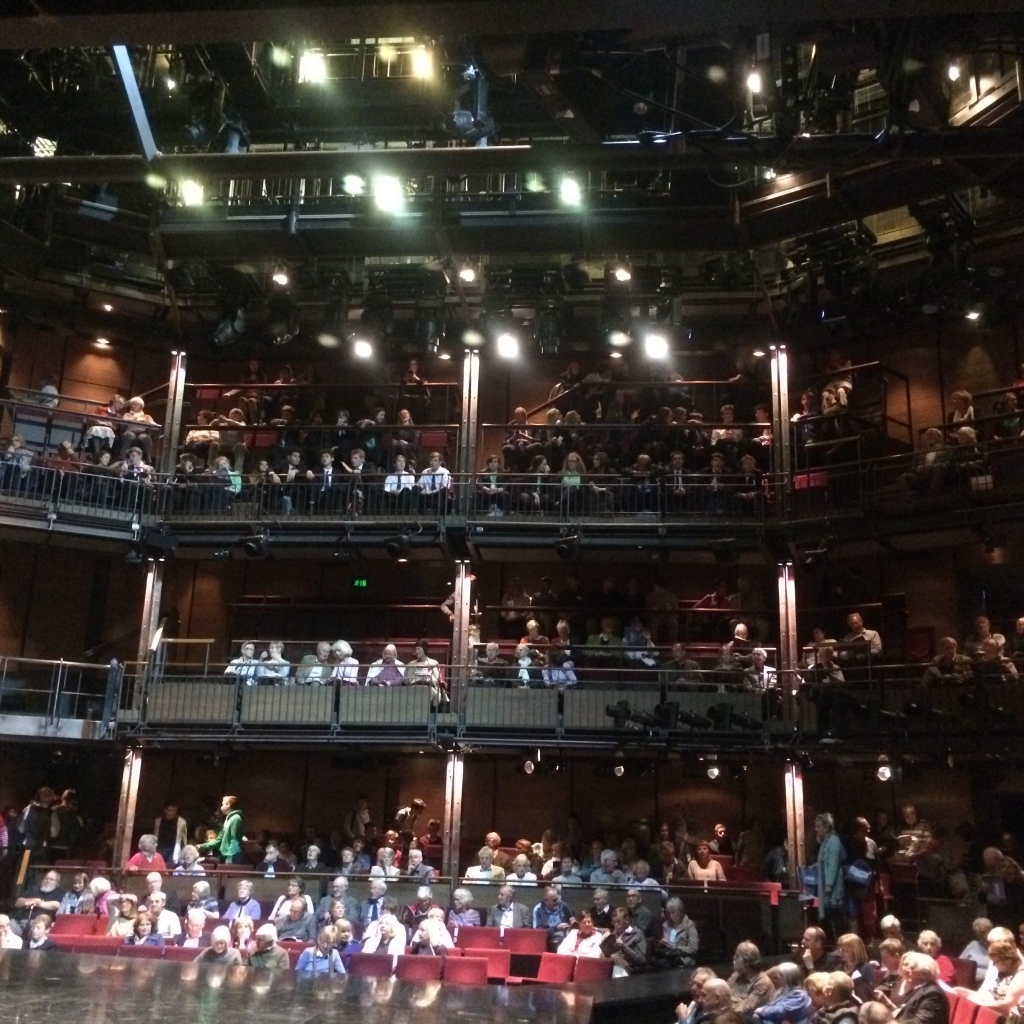 Pics as always thanks to JFS although I took this apparently illegal one in the theatre as we waited for Henry. 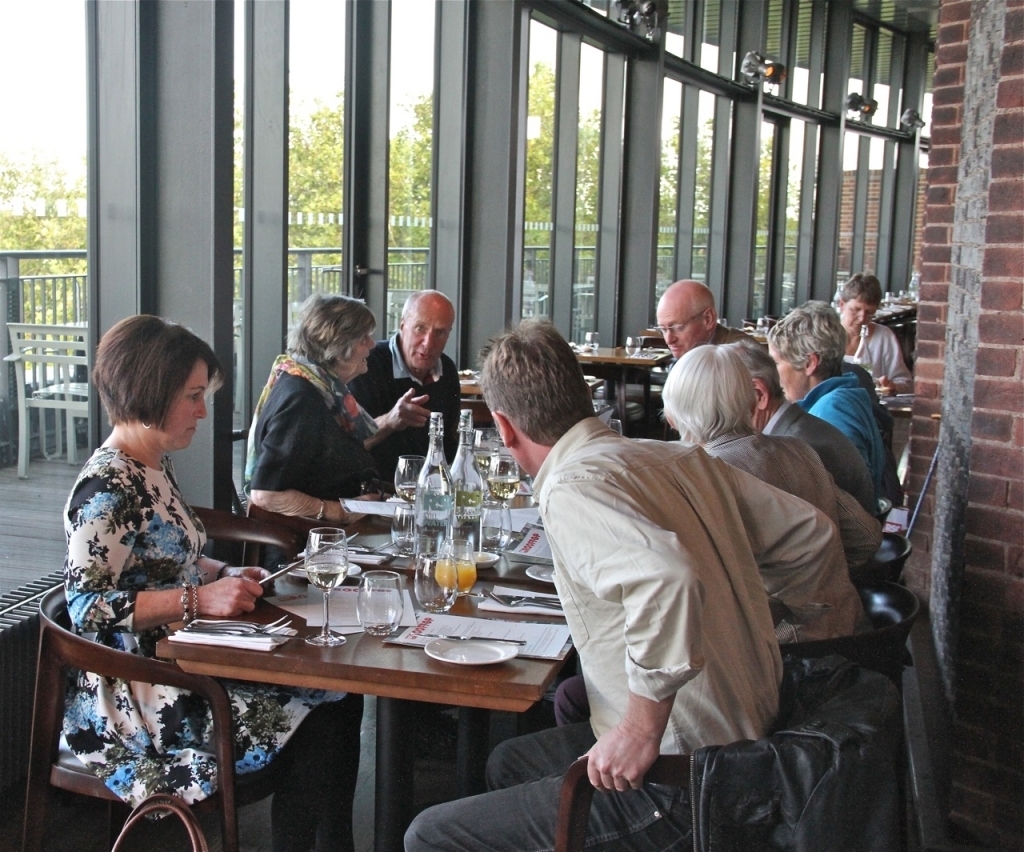 We are so lucky to be within striking distance of the RSC, and always turn the outing into an extra fun occasion by having a pre or post theatre dinner together, usually these days at the RoofTop above the theatre

I had never seen Henry V but having seen the other three of what is now dubbed Greg Doran’s ‘RSC tetralogy’, and more recently having read the play, found it all very easy to follow, although if I had not read the notes by one Jonathan Bate accompanying the RSC Shakespeare edition much of the extremely bawdy content would have past over my head – such is the price of ‘doing’ Shakespeare at school with heavily expurgated texts: one is inclined to accept words and comments at face value. I am also always surprised how much easier it seems to follow the action when great chunks of it are simply not there there, mysteriously.

We sat, four rows back at stage level so all the action felt very immediate. The Chorus, Oliver Ford Davies, looking like some latter-day Mr Chips – bearded, benevolent, inspirational – literally sets the scene at the beginning of each act. trying to conjure up in our imaginations a lively vision of the activity and accompanying emotions.

So… there was the bawdy and riotous, with hilarious scenes involving Pistol and his mates, and Mistress Quickly, and of course the wonderful attempts by Henry’s intended, Princess Katherine of France, to master English with the help of her maid, Alice. There was also the violent, but even that was low key with a motley crew of ill-disciplined soldiers from Scotland, Wales and Ireland, only united by their hatred and mockery of the French who appear more interested in discussing heir uniforms, mistresses and horses than taking the English enemy seriously or actually planning any battles.

King Henry himself (played by Alex Hassell) demonstrates that he is very conscious of his steamy past and lingering reputation for being a wild lad about town. He is transformed and comes over now as quiet, honourable, very determined to do the right thing, to justify his invasion of France and his demand for its throne. When he rallies his men around him his exhortations are considered, low-key and intimate, not shouted defiantly from the rooftops.

Dominic Cavendish in an article in the Thursday 24 September Daily Telegraph ‘King Henry beats Hamlet’ considers the play far superior to the ‘Cumberbatch Hamlet’ which I must admit I have not seen so cannot comment; however, so impressed is Cavendish that he feels compelled to ‘Kneel down and kiss the ground outside the RSC’ after seeing the play. None of us exactly did that but we did all feel we had just witnessed something pretty special.

Henry V is moving to the Barbican in early November. If neither London nor Stratford is convenient you could also watch the filmed version of the play, to be broadcast in the UK live on 21 October 2015, the same week as the anniversary of the Battle of Agincourt. You’d be better consulting the RSC Website if you live abroad anywhere as I think it is being shown around the world but at different times.

The date is firmly in my diary. 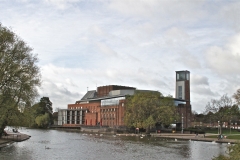 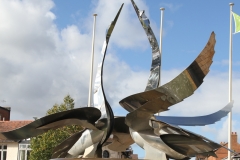 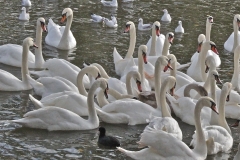